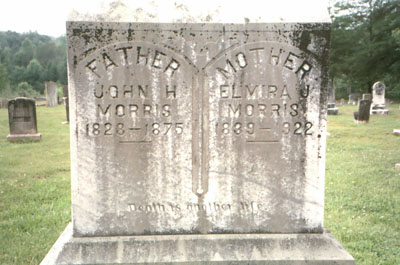 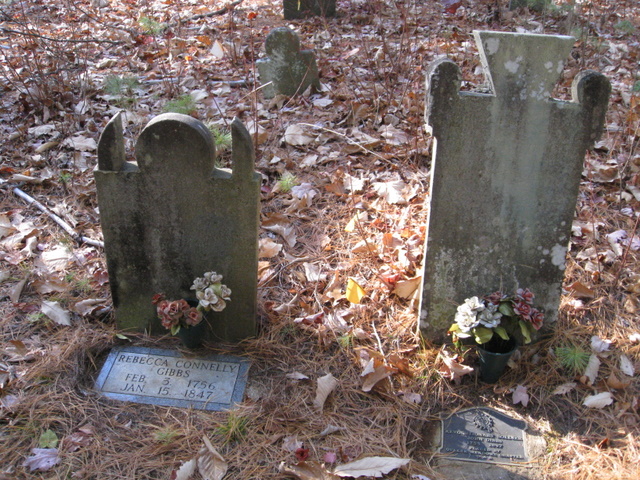 Notes In 1790 Census Rev. John Gibbs and Rebecca had six boys under sixteen
( William, James, Hugh, John, Joshua and Bryant) and three females (one was Rebecca his wife),
Females were not categorized by age during this census.
He was in the Second Company of the Militia which was commanded by his Brother-in-Law Captain John Connelly.
He was living near all the Connellys in the Lovelady district on the North side of the Catawba River,
which is present Caldwell County North Carolina.
There was a John and Richard Gibbs in the thirteenth company (Morgan District)
they were living in the same household and indicated as brothers in a typed transcript
this may have been an "assumption" by the transcriber.
It turned out to be an assumption by the transcriber, the microfilm had no such indication.
That John (who married Hanna Muchmore) moved to Kentucky.
DNA evidence from a single source believing himself to be a descendant of that John indicates there was no relationship between the two John Gibbses.
That Richard's will was presented to Burke Court for probate ca. 1808 but that's the only infomation I have found . . .
the actual will and what it said were probably lost in the Courthouse fire during the Civil War (General Stoneman's raid).
In the 1800 Census for Burke Co., NC John Gibbs is missing!
I now know that he moved from Lovelady district to the Bridgewater/Nebo North Carolina before 1810.
I believe he may have traveled or moved to Garrard County Kentucky where
his Daughter Suzanna married a Brown and then returned to Bridgewater before 1810.
Thus he missed the 1800 Burke County North Carolina Census.
In 1810 Census, page 337, line 1.
They had one boy less than ten (Wesley), two boys ten to sixteen (Bryant and Thomas) and two sixteen to twenty-six (Joshua and John). . .
William, James and Hugh had separate households.
They had one girl sixteen to twenty-six, thus born between 1784 and 1794.
Suzanna's weding date will indicate whether this could be her or even a third girl child.
This can not be Elizabeth since she married in 1805 and moved to Ohio.
In 1820 Census he had two boys between sixteen and twenty-six,
these could be Thomas and Wesley, since Archibald is probably over twenty-six .
But *surprise* he also has two girls between ten and sixteen,
I am working from an extract I need to check this on the census tapes Perhaps they were over sixteen.
His wife would have been too old to have these girls. They may be Wesley and Thomas's wives,
he may have taken them in from some other Gibbs, or they could be his grandchildren.
He was also listed as John Sr. Which indicates he indeed had a son named John.
Prior to 1825 John gave land for the Nebo Meeting House although he didn't actually deed it until 1844.
He had land on Shadrach Creek in present Nebo area just to the west of Bridgewater.
In 1840 Wesley Gibbs had a man and a woman between eighty and ninety living with him.
These are obviously John Gibbs and Rebecca Connelly Gibbs since there was no other couple in his family who lived to that age.
They were living South of the Catawba and West of North Fork, somewhere from Marion to Old Fort area.


John Gibbs, S 8556, North Carolina
John Gibbs - - S, 8556 Revolutionary Soldier.
Enlisted while a resident of Burke County, North Carolina in 1780.
Served three months under Captain Clark,
Again called out in the summer of 1781 and served three months under Captain
John Conley by order of Colonel McDowell.
He was allowed a pension on an Application executed July 15, 1844,
while a resident of Burke County, N.C. aged 89 years.
He was allowes a pension at the rate of $20.00 Per Annum.
State of North Carolina, Burke County:
on this 15th, day of July one thousand eight hundred and forty four, 1844 personally appeared before me.
Mr. William R. Rust, one of the acting magistrates and member of the court of pleas and quarters sessions in and for said county,
John Gibbs a resident of the county and state aforesaid,
aged eighty nine years who being first duly sworn according to law,
doth on his oath make the following declaration in order to obtain the benifit of the act of Congress passed June 7th, 1832.
That in the days of the Revolution he resided in Burke county North Carolina
and entered the service of the united states under the following named officers and served as herein stated.
That in the year of 1780 he was drafted into the service
for a tour of three months under Captain Clark who marched his company from Burke into Charlotte
where they joined General Davidson who was stationed in Mecklenburg County
and that after staying some weeks at the post, they were joined by General Morgan who spent a few days with them,
and then the armies parted and the declaraant
was placed under General Morgan who marched on to the south Carolina to the Cowpens
at which post the declarant was discharged having served out his tour of duty.

The next tour of duty was in the summer of the year following, in the year 1781,
he was again called into service to serve another three months tour
under Captain John Conley by order of Colonel McDowell and was ordered on to
the Fort at the head of the Catawba River where the deponent served out his tour of duty as was discharged.
The deponent further states that he performed other services but the above
is the only regular tours that he was out, he also stated that he has no
Documentary evidence in support of his service that he can prove a part or all his service by payrool evidence.
The declarant also states that his name is not on the pension roll or any
agency except the present and that the reason why he has not applied before this
late day for his pension is that he was disappointed by an agent that he had
employed, and that the amount was so small that he thought to live without and is now
from actual necessity he is induced to apply for a pension.
Sworn to and subscribed on the day and year first above written before me. Wm. B. Rust, J. P.

In a letter listed with above WM. Rust states that Stephen Ballew a resident of
Burke county and aged 83 years stated that John Gibbs "
Is a minister of the Gospel, a person to whom statements is due full faith and credit."
also Mr. Ballew said that he now and was in the days of the Revolution well acquainted with John Gibbs of Burke county;
that he was out in the service with said John Gibbs in July or August 1780"

We now know his application made no mention of Children.
NOTE: The "Fort at the head of the Catawba (river)
was what became the present town of Old Fort, McDowell County North Carolina.
In his later years Reverend John once represented Hebron at the quarterly Methodist circuit meeting.
Hebron Wesleyan Methodist Church is located in present Old Fort across the street from Hardee's Resturant.
This makes three Methodist Churches (Oboth, Nebo and Hebron) in which Reverend John was an active participant.

alt info found on the web